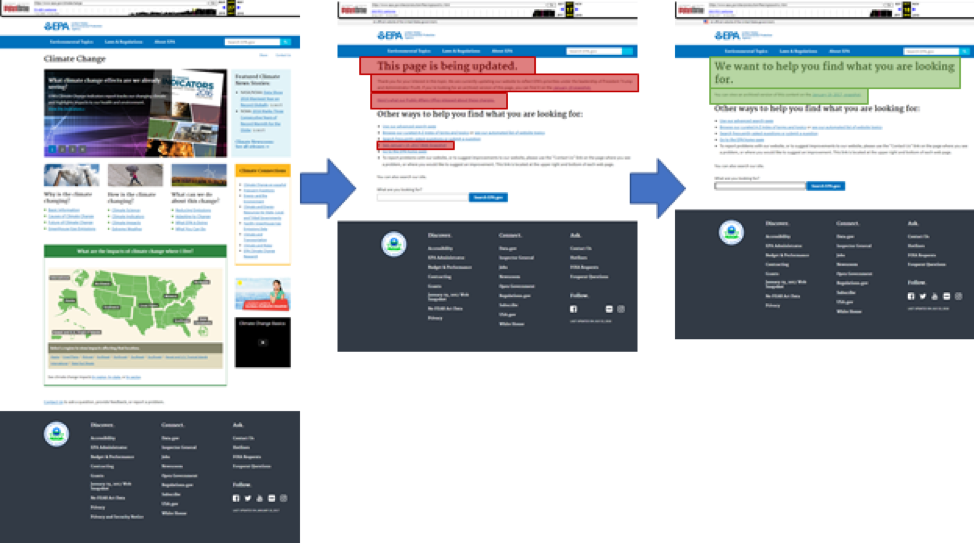 Welcome! This post is part of the EDGI Website Monitoring Team’s “Change of the Week” blog series. The purpose of this series is to highlight interesting changes we have observed in the language used on, or access to, federal websites. We want to share these changes to encourage public engagement with and discussion of their significance, as well as understanding of the ephemeral nature of website information. This week’s change was made in October 2018 and features the removal of EPA’s Climate Change website. The website had been hidden from public view for “updating” since April 2017, but, starting in October 2018, the 80+ URLs were no longer being updated…and had essentially each become a “Page Not Found.” This change was first identified in our report, “EPA Discontinues Updates to Climate Change Websites.” 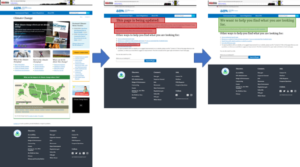 The EPA Climate Change website (its main page featured on the left) was replaced with the “This page is being updated” static page (center) on April 28, 2017. The static page was overhauled between October 17, 2018 and October 18, 2018 to remove the last remaining information about the prior existence of the EPA’s Climate Change website yet claim “We want to help you find what you are looking for” (right). Text highlighted in red in the center pane was removed; text highlighted in green in the right pane was added.

On April 28, 2017, the EPA’s Climate Change’s website (see above, left image, main page archived here) was replaced with a static page that noted, “This page is being updated … to reflect EPA’s priorities under the leadership of President Trump and Administrator Pruitt” (see above, center image). Between October 17 and 18, 2018, the EPA then abruptly changed the message on this static page (see right image). Now, the page no longer acknowledged that a user had tried to access a Climate Change webpage. Instead, the page simply stated that, “We want to help you find what you are looking for.” The EPA also removed a link that pointed to the EPA’s archived version of the old Climate Change website landing page, and  the press release about the hypothetical website update. Read more about this change in our report, “EPA Discontinues Updates to Climate Change Websites.”

Yesterday marked the two year anniversary of the EPA no longer purporting to update its Climate Change website. We want to highlight this change because the importance of federally-provided, science-based information cannot be overstated. Senator Kamala Harris has cited the removal of climate change language and information from agency websites in both the Vice Presidential Debate and Senate Judiciary Committee hearing for Judge Amy Coney Barrett as evidence of the Trump Administration’s undermining of climate policy. The removal of the EPA Climate Change website is perhaps the most drastic example of the Trump Administration’s assault on public information – and attacks on public information are attacks on democracy itself.

Here’s the story about this audacious removal of information: On the eve of the People’s Climate March and Trump’s 100th day in office, the EPA abruptly took down its Climate Change website, redirecting all 80+ webpages to a single static page stating that the webpage you were looking for was being updated to reflect the priorities of the then-new Trump Administration. At the same time, the Climate and Energy Resources for State, Local, and Tribal Governments was also redirected to this static page, and the Clean Power Plan website was redirected to a new single webpage, “Energy Independence,” about President Trump’s Executive Order, “Promoting Energy Independence and Economic Growth.” These changes reflect a calculated effort to reduce public information about the relationship between fossil fuels and climate change, which President Trump and then-EPA Administrator Scott Pruitt had claimed was debatable, and to pave the way for deregulatory actions.

This removal took away the public’s access to web resources on climate science, climate change impacts, intersectional issues (such as water scarcity and climate change), potential mitigation strategies, ways to adapt to climate change, and more. During a pivotal time when our nation’s leading climate change scientists have demonstrated the need for immediate climate action, the Trump Administration’s EPA, first under Scott Pruitt and now under Andrew Wheeler, has done its best to hide climate change information from the public. Yesterday marked the two year anniversary of the EPA not even trying to deny that information suppression anymore. It was, and continues to be, an overt attack on public information.