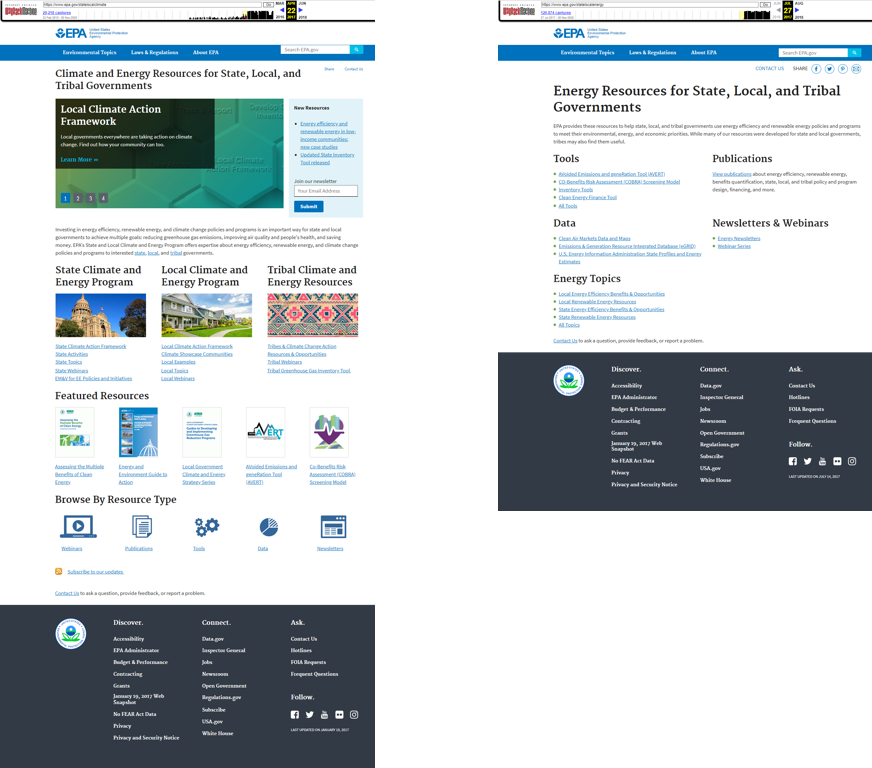 Welcome! This post is part of the EDGI Website Monitoring Team’s “Change of the Week” blog series. The purpose of this series is to highlight interesting changes we have observed in the language used on, or access to, federal websites. We want to share these changes to encourage public engagement with and discussion of their significance, as well as understanding of the ephemeral nature of website information. This week’s change, which occurred early in the Trump administration, revolves around an EPA website that was removed and replaced with a similar resource that had been purged of all climate change content. This partial replacement was an early indicator of the many subsequent changes made to federal environmental webpages monitored and reported on by EDGI over the past four years. Our findings underscore the challenges and opportunities that the Biden administration faces in restoring public access to and confidence in public information resources.

On April 28, 2017, the EPA removed the majority of its climate change information, including the EPA websites “Climate Change,” “Climate Change Science,” “Climate Impacts,” and “Climate and Energy Resources for State, Local, and Tribal Governments” from public view. URLs for these and other EPA climate change subdomains began redirecting users to a notice that stated, “We are currently updating our website to reflect EPA’s priorities under the leadership of President Trump and Administrator Pruitt.”

A thorough analysis of the differences between these two websites can be found in our report, “Assessment of Removals and Changes in Access to Resources on the EPA’s ‘Climate and Energy Resources for State, Local, and Tribal Government’ Website.’” None of the other climate-focused EPA websites removed in April 2017 were ever re-launched, and all were eventually fully removed, with each URL registering as a “Page Not Found.”

Joe Biden made climate change a cornerstone of his presidential platform, pledging to spend $2 trillion on clean energy, re-join the Paris Agreement, and achieve net-zero emissions by 2050. In appointing John Kerry as special presidential envoy for climate on November 24th, Biden stated that “he will be matched with a high level White House policy coordinator and policymaking structure to be announced in December.” The clear implication is that addressing climate change across all federal agencies will be a high priority. It will be critical, then, to get a handle on the extent of climate-related website removals and replacements over the past four years that will need to be restored or revamped to ensure that the public has access to complete, reliable information on all environmental and climate matters.

The Trump administration’s 2017 removal of climate change information from the re-launched Energy Resources website not only signaled what was to come in terms of restrictions of climate change information on the EPA website, but also underscored the need for vigilant monitoring of access to and content of environmental information across federal website domains. In addition to the general public, states, municipalities, tribal governments, educational institutions, internal federal staff, and other stakeholder entities also rely on the integrity of these resources. EDGI’s web monitoring team has dedicated itself to monitoring changes to federal web resources over the past four years, rigorously reporting on important issues as well as incorporating our findings into public comments on rule change proceedings.

EDGI looks forward to helping inform the website restoration and improvement process of the new administration. Our website monitoring team is currently developing a set of recommendations for web governance of regulatory-related resources, and is preparing a public dataset of important website changes over the last four years.