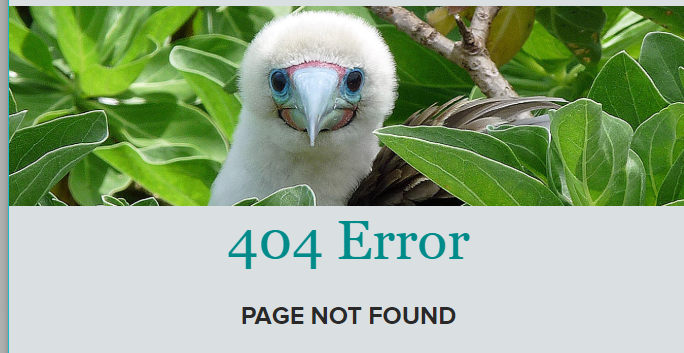 Image: A capture of FWS.gov’s 404 error page. Users will no longer be able to access the site’s “Incidental Take” page.

President Trump has tapped Daniel Jorjani to serve as the Interior Department’s top lawyer, after a vacancy of the position for two years. The nomination has raised concerns about protections for endangered species as Jorjani has already taken steps to undermine the Migratory Bird Treaty Act (MBTA). While serving as the Interior’s Deputy Solicitor, Jorjani issued a memo on the MBTA in which Jorjani concluded that the Migratory Bird Treaty Act does not prohibit the incidental taking of migratory birds, but only those activities that “have as their purpose the taking or killing of migratory birds, their nests, or their eggs.” The decision was a clear reversal of the Office’s January 2017 opinion under the Obama administration, which clarified the prohibition of incidental take.

The Trump Administration’s decision to eliminate the longstanding protections for migratory birds caused a backlash. In September 2018, eight States filed a lawsuit to restore the law. Additionally, a bipartisan group of former federal officials submitted a letter to then-Department of the Interior Secretary Ryan Zinke.

The decision triggered the removal of access to Migratory Bird Treaty Act and incidental take resources from the Department of Interior’s Fish and Wildlife Service (FWS) domain. A report released by the Environmental Data and Governance Initiative’s Web Monitoring Team documents the removal of links, webpages, and an entire “public involvement” website maintained by the FWS.

The removal of a webpage titled “Incidental Take” occurred in the days after the December 22, 2017 memo. The webpage, located in the “Birds” section of the FWS website, was removed between December 28, 2017 and January 29, 2018. The page contained text and links to resources about threats that contribute to migratory bird mortality. Threats identified on the page included “anthropogenic threats,” such as collisions with human-made structures, electrocutions, and exposure to chemicals. The page also linked to activity- and species-specific voluntary guidance and FWS conservation measures to reduce incidental take caused by industry.

The office also undermined the ability to access information on the MBTA by removing links directing users to the MBTA’s main page from two FWS webpages: “Energy Development Laws and Policies” and “Conservation Planning.”

The Trump administration had taken earlier steps to undermine access to online incidental take resources. An entire website on the issue of incidental take, BirdRegs.org, was also removed between January 22, 2017 and March 3, 2017. The site was “a public involvement initiative” of the U.S. Fish and Wildlife Service to promote “an open, public conversation about the incidental take of migratory birds,” and was created in 2015 when FWS was pursuing a programmatic environmental impact statement (PEIS) to consider “an approach to developing authorizations for incidental take of migratory birds.” The removed website consisted of three main pages titled “The Issue,” a page that contained information on “Bird mortality due to human activities and structures,” “The Conversation,” and “The Process.”

The MBTA remains law, though the current administration’s opinions on the incidental take of migratory birds impacts the enforcement of the law with regards to incidental take. It is important to note that, while the December 2017 Solicitor’s opinion reversed the century-long interpretation that the MBTA prohibited incidental take, the opinion does not call into question the fact that incidental take happens or that it poses a threat to migratory birds. Removal of these web resources largely undermines the public’s ability to understand and form opinions about the protections, or lack thereof, for migratory birds.

Aaron Lemelin is a member of EDGI’s Web Monitoring Team and a Web Monitoring Analyst at the Sunlight Foundation’s Web Integrity Project. Follow on twitter at @aalemelin.

Marcy Beck is a member of EDGI’s Website Monitoring Team.