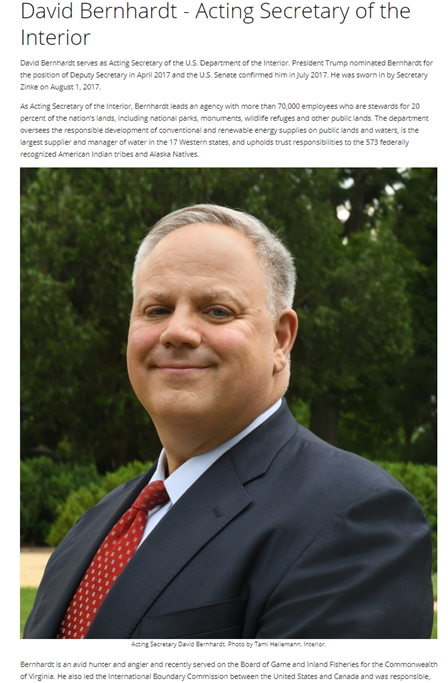 The Department of Interior’s (DOI) biography page for David Bernhardt, the nominee for Secretary of the Interior, omits description of Bernhardt’s long history of work for fossil fuel and mining companies who have a vested interest in increased access to the public land that the DOI stewards and illustrates how agencies are becoming increasingly unreliable sources for objective and thorough public information.

To address this omission we review Bernhardt’s bio from the law firm of Brownstein Hyatt Farber Schreck (BHFS) which (while erased sometime between July 18, 2017 and August 19, 2017, and scrubbed sometime prior to his first nomination hearing) is still retained by the Internet Archive. It details his work for “Mining companies who aim to develop on federal lands, “An entity under investigation by a Federal Agency” and “Entities accused of violating the Department of the Interior’s regulations.”

It’s important to highlight these omissions today as the U.S. Senate Committee on Energy and Natural Resources is considering confirming David Bernhardt as the Secretary of the Department of the Interior (DOI). Bernhardt has served as Acting Secretary since the previous Secretary, Ryan Zinke, resigned at the end of 2018 in the midst of scandal and federal investigations. His nomination for secretary continues a worrying trend toward increasing fossil fuel industry influence over public agencies.

As this blog and EDGI’s ongoing work tracking and reporting on changes to federal websites demonstrates, Bernhardt’s likely ascent highlights the growing need for active public oversight of these critical government agencies.1

None of Berhardt’s work for fossil fuel and other industrial interests are specifically mentioned in his official bio on the DOI website. There the public can learn that Mr. Bernhardt has served the DOI with distinction since his swearing in (August 1, 2017), and gained critical legal and regulatory experience while serving in several other positions within the DOI, including Solicitor, under the Bush administration from 2001 – 2009.

However, no mention is made of the years between 2009 and 2017, though his contributions to a federal commission and on a board to a Virginia state agency are highlighted without time associations.

Important things happened in Bernhardt’s career from 2009 to 2017 that are pertinent for the public. Thankfully, other online bios offer a fuller picture of his background.

LinkedIn is a natural place to start in this effort. His profile there shows that he served on the commission mentioned above during his time at DOI under President Bush. It also indicates that from June 2009 – August 2017 (right up until the time of his swearing in) he was a “Shareholder” at the law firm of Brownstein Hyatt Farber Schreck (BHFS).

On the landing page of BHFS, one learns that it is the place “[w]here business, law and politics converge. When the stakes are high and conventional solutions are not enough. When your business, reputation or industry is on the line. Our deep experience, multidisciplinary approach and political connections deliver results. Because today, successful outcomes require more than just practicing law” (emphasis added). The benefit of the revolving door to BHFS is even more apparent in their description of team members on their Energy and Environment, and Resource Strategies team (which fell under Bernhardt’s purview during his time there). It says, “With collective insights gathered from decades of experience working as decision makers across various federal agencies, we know how to best position clients before Congress, federal administrative agencies and the courts. Members of the EERS Group have held key positions in which they developed, implemented and defended major policies, including serving as chief legal officers at the Interior and the Environmental Protection Agency (EPA), decision makers within the Interior and the EPA and Office of Management and Budget (OMB), and senior congressional staff and legislative strategists.”

Unfortunately, a search of people at BHFS will not provide a profile of David Bernhardt. That is because, sometime between July 18, 2017 and August 19, 2017, the David Bernhardt bio page that did exist on the website of BHFS was taken down.2

Even more interesting is the fact that sometime after April 25, 2017, while in the midst of the nomination process for his Deputy Secretary position, the BHFS bio was scrubbed to remove extensive mention of his work on behalf of energy, mining, and agricultural interests, usually against federal agencies and regulations.3

Finally, it is worth pointing out that Acting Secretary Bernhardt’s BHFS bio highlights his work for the DOI and how that will benefit his private-sector clients, presumably as part of the “results delivering” “political connections” that are touted by BHFS. This detailed history helps to fill the 9 year time-line gap in DOI’s bio of the same man. This snippet from the pre-April 25, 2017 version of his BHFS bio provides the public a more accurate presentation of Bernhardt’s background:

David Longly Bernhardt is chair of the firm’s Natural Resources Department and represents a wide range of clients in rulemakings, regulatory enforcement proceedings, adjudications and permitting reviews. In addition, David provides comprehensive strategic counsel to several corporate, government and non-profit entities. His multi-disciplinary practice provides advocacy and advice to clients on issues originating from Federal administrative agencies, the White House, Congress and the courts, with special emphasis on issues, transactions and cases related to the environment, energy, natural resources and wildlife.

David’s practice is based on extensive experience gained from his public service both as the Department of the Interior’s chief legal counsel and as a policymaker who led efforts related to species conservation, conventional and alternative energy development, natural resources planning, environmental compliance, climate change and Indian affairs.
https://web.archive.org/web/20170425232709/http://www.bhfs.com/people/attorneys/a-b/dbernhardt

David Bernhardt’s connections to these industries are so deep, in fact, that, in a shocking report by the investigative journalists at Reveal, an audio recording came to light which captures a gathering of oil executives being very excited over their access to federal offices through Bernhardt and others. Regarding Bernhardt specifically, Reveal reports that industry representative Dan Naatz stated, “We know him very well, and we have direct access to him, have conversations with him about issues ranging from federal land access to endangered species, to a lot of issues.”

So, what does all of this mean? While Bernhardt’s work history strongly implies a likelihood of bias in favor of industry, it is not itself a proof of bias – particularly without more detail on the specifics of the experience listed in his biography. However, there have been indications of his involvement in significant changes made in DOI policies and regulatory stances during the Trump administration particularly around endangered species, protection of migratory birds and efforts to address greenhouse gas emissions.

EDGI has published several reports and blog posts highlighting recent actions by the DOI—all of which research by other organizations shows have been publicly commented on, approved, or otherwise supported by Bernhardt—including reports on DOI efforts to:

The New York Times highlights Bernhardt’s involvement in blocking a Fish and Wildlife Service report on the potential negative effects of two pesticides on endangered species, an issue which simultaneously highlights the DOI’s efforts, under Bernhardt’s active direction, to offer extractive industries greater flexibility at the expense of conservation and preservation, and their efforts to reshape how regulatory science is done.

Bernhardt’s influence is especially apparent in the migratory birds issue, which included an official reversal of federal opinion on the issue of incidental take of protected birds (that is, the incidental killing of birds while taking actions not intended to harm birds) made by Daniel Jorjani, the person currently filling the position of Solicitor.5 A report by Reveal, based on DOI personnel email exchanges Reveal obtained through a FOIA request, argues that Bernhardt directly pushed the department’s lawyers, including Mr. Jorjani, toward his preferred outcome regarding migratory birds.6

From DOI orders it is clear where Bernhardt stands on issues related to preservation public lands: he often makes decisions that favor oil and gas extraction over preservation and environmental protection. He wrote and signed DOI Order 3360 implementing presidential orders to increase domestic energy production by, among other things, rescinding standing policies in the DOI regarding climate change and oil and gas extraction mitigation. Similarly, Bernhardt is responsible for DOI Order 3355, which has as its goal and title “Streamlining National Environmental Policy Act Reviews,” an effort which short circuits critical environmental safeguards like Environmental Impact Statements and public commentary periods.

Bernhardt’s policy stances are even more apparent in actions that have occured in the months since Ryan Zinke resigned. Since his ascent to the top position in the department, his agency has highlighted:

It would be unfair to say that the DOI under Bernhardt and his predecessor have done nothing to protect lands, people, and wildlife in the U.S. Bernhardt has, for example, supported initiatives to reinforce the importance of public access to public lands, worked in a limited fashion to add to those lands, and maintained support for mine reclamation despite an enormously slashed budget.7 However, it is clear from their policy revisions, deregulatory efforts, and full-throated support of President Trump’s push to significantly increase fossil-fuel energy production in the U.S. that, on the whole, their priorities begin with private-sector energy interests before considering conservation and preservation efforts.

The appointment of a new Secretary is a unique opportunity for the Trump administration and the Department of the Interior to reaffirm a commitment to managing public lands and resources in a manner which supports the interests of the American people, today and into the future, over short-sighted extractive industry interests. Unfortunately, the nomination of Bernhardt illustrates a lack of will to take that route.

Moreover, from the blatant omissions of Bernhardt’s potential conflicts of interest from his official DOI bio to the removal of important public information about climate change and the killing of migratory birds during industrial operations, the public should also be concerned about the government’s democratic accountability, which begins by providing its citizens with objective and thorough information.