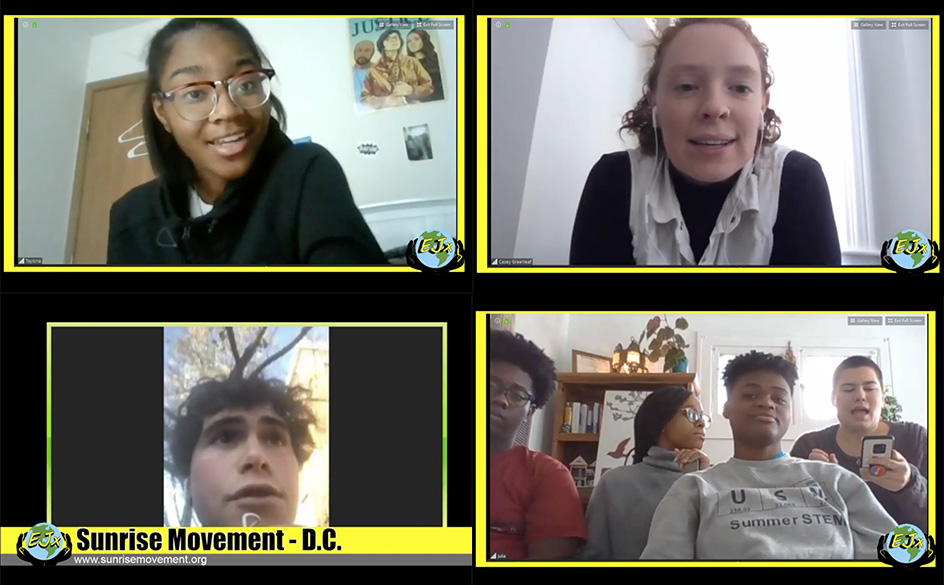 By Kelly Wilkins and Kelsey Breseman

Guest speakers included DAYUM (Detroit Area Youth Uniting Michigan), an activist organization run by high school students fighting for social justice and a seat at the table for youth; and Jeremy Ornstein and Casey Greenleaf from the Sunrise Movement, the political activist organization advocating for the Green New Deal, an economic stimulus plan to address climate change and create jobs.

Social justice, environmental issues, and the power concentrated in youth activism were the common threads connecting the work and projects of the summit’s speakers. DAYUM was started by youth who organized Detroit March for Our lives and went on to lead a school strike and water testing project in response to a water shut-off at their school over lead levels. ECO holds a monthly ‘Youth Assembly’ to inform and organize youth about environmental issues and has also worked on water testing in their community and other citizen science projects. And activists Jeremy Ornstein and Casey Greenleaf of the Sunrise Movement are a part of a nationwide movement that centers youth and vulnerable communities in the fight against climate change.

One of the most instructive aspects of the discussion was listening to the ways in which these young leaders have experienced adultism, or the prejudice and accompanying discrimination against youth by adults. This was the topic Casey Greenleaf of the Sunrise Movement presented on. Subtle examples of adultism are comments like ‘You’ll understand when you’re older,’ and ‘It’s nice to see young people so involved in politics.’ Another, more oppressive example is our youth’s lack of agency when it comes to planning their own education.

Speakers from DAYUM pushed back on the oft-received question “How can organizations do more to support and engage youth?” by saying that this question implies that they aren’t involved, when in reality young people are at the forefront of many social and environmental justice struggles and have been throughout history.

Members of ECO expressed frustration that adultism has led adults to ignore some of their critical work. “Sometimes it feels like we have data, and we have things that show them how bad things are, and they’re like, ‘Oh yes, so interesting. Thank you for sharing.’ And it almost seems like they just kind of toss all of that information and all of that knowledge that we just gave them in a barrel.”

DAYUM’s experience with adultism also informs their organizational structure. One of their members explained that their practice of sharing power works well for them because they understand how hierarchical environments feel. “We know what it’s like to sit in schools, to stick it out, and be told to shut up and do your work. And you don’t have a say in anything … [W]e never want each other to feel shut down because of who we are … we want to make sure that everyone can rise.”

From local initiatives to test the safety of water in schools, to a national-scale plan to transform the economy, this handful of youth organizing groups demonstrates strong, intersectional youth leadership across social and environmental justice movements. And they’re not waiting for adults to handle these critical issues, or for their approval.

“It was so easy for me to think that the way to make the world better was to follow the rules and say all the old tired things that our political leaders and the political establishment say, and to act on behalf of older people’s interests,” said Jeremy Ornstein. “This past year has shown me that if we who see the pain and possibility in this world lead with our stories, and lead with our values, we’ll find more power than anyone could have dreamt of. And that’s how we’re going to change the world, and that’s how we’ve already been changing it.”

Watch the recorded webinar to learn more about the stories of these young activists: https://www.youtube.com/watch?v=Jlr_iExbxJM&feature=youtu.be