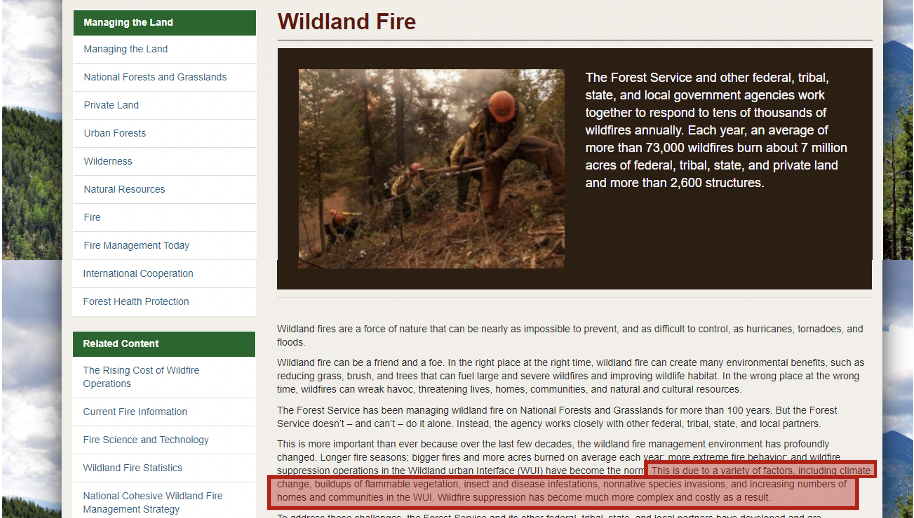 Welcome! This post is part of the EDGI Website Monitoring Team’s “Change of the Week” blog series. The purpose of this series is to highlight interesting changes we have observed in the language used on, or access to, federal websites. We want to share these changes to encourage public engagement with and discussion of their significance, as well as understanding of the ephemeral nature of website information. This week’s change was made in  June 2017 and features the removal of the only sentence about climate change on the U.S. Forest Service’s Wildland Fire webpage.

What happened? In the middle of wildfire season, June 2017, the U.S. Forest Service (USFS) deleted the only sentence on its “Wildland Fire” webpage that mentioned the reasons that fire seasons have become longer and more intense, “This is due to a variety of factors, including climate change, buildups of flammable vegetation, insect and disease infestations, nonnative species invasions, and increasing numbers of homes and communities in the WUI. Wildfire suppression has become much more complex and costly as a result.”

Why we think it is interesting: Studies have shown that the U.S. wildfire season, and others around the globe, are becoming longer and more intense. Climate change contributes to the increased severity of wildfires and the wildfire season in many ways. But in the middle of the most expensive wildfire season in U.S. history, in which the USFS spent more than $2 billion dollars and enlisted more than 27,000 people to fight wildfires, USFS removed the only sentence on the agency’s main webpage about wildfires that mentioned reasons for increased challenges fighting wildfires. The sentence that was removed contained the only mention of climate change on the page.

It’s important to note that USFS has more visible and accessible climate change information than many other federal agencies these days. USFS does state the connection between climate change and wildfires on at least one webpage, the “Resilient Landscapes” webpage, which includes “Climate change has made fire seasons longer and droughts and insect infestations worse. Whole landscapes are now vulnerable to devastating, extreme wildfires.” However, the “Wildland Fire” webpage is the primary landing page about fires, and no longer includes reference to climate change or other anthropogenic factors impacting wildfire seasons. The USFS “Climate Change” webpage does not include anything about fires. As the agency tasked with protecting our national forests and grasslands, including orchestrating our national approach to fighting wildfires, we think it is notable that USFS does not present the connection between climate change and the intensified devastation of wildfires on its primary webpage about wildfires.