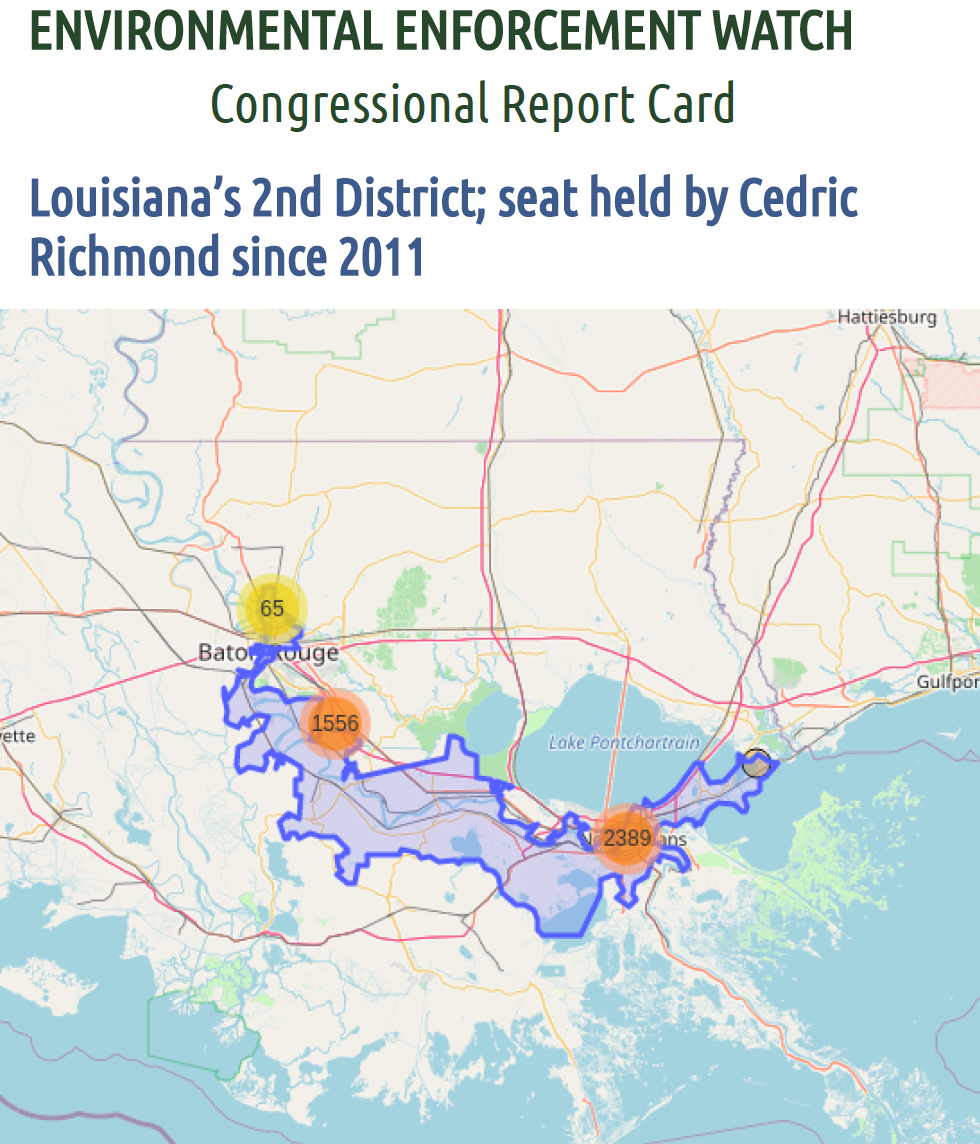 Environmental Enforcement Watch’s new report card on EPA enforcement in Cedric Richmond’s district between 2001 and 2019 adds to the public understanding and discussion around Richmond’s nomination. View the report card here.

The choice of Rep. Cedric Richmond as director of the White House Office of Public Engagement for the incoming Biden administration has drawn criticism from climate advocates, due to his ties to the fossil fuel industry  (see figure 2 and 3 for funds taken by Richmond from oil and gas industry sources).

An investigation by the Environmental Data Governance Initiative (EDGI) found Richmond regularly accepted donations from the top violators of environmental laws in his district throughout his recent term as representative for Louisiana’s 2nd congressional district. Since 2011, he has accepted a total of $108,000 from Nucor Steel, Dow Chemical, Occidental Chemical, Mosaic Phosphates Co., ExxonMobil, and Union Pacific Railroad, some top violators of the Clean Air Act (CAA), Clean Water Act (CWA), and Resources Conservation and Recovery Act (RCRA) in his district (Fig. 1). These industry donors have abysmal records of compliance with key environmental laws: Nucor Steel, Mosaic Phosphates, and ExxonMobil have all been out of compliance with the CAA for the entire last three years (Fig. 1a). Two Mosaic facilities, ExxonMobil Chemicals and Occidental Chemical, have also been out of compliance with RCRA, which regulates hazardous waste, for all of the last three years (Fig. 1c).

Beyond taking money from facilities in flagrant violation of the nation’s most critical environmental protection laws, violations of the CWA in Richmond’s district rose by 104% and enforcement actions under the CWA, CAA, and RCRA fell by 17% since 2016, coinciding with Trump’s term in office. In 2019, there were a staggering 2,000+ violations among the 1,209 facilities operating with Clean Water Acts permits for his district, with fewer than 100 inspections conducted by the EPA or state/local agencies. These violations of environmental laws have detrimental human health consequences.

Richmond’s district faces severe and elevated risks of chronic illnesses. It encompasses the city of New Orleans and harbors seven of the ten most air polluted geographic regions recorded in the United States, due to the high concentration of oil and gas refineries in close proximity to residential communities (commonly known as fenceline communities). This is the most densely populated district in Louisiana, housing over 700,000 residents. The cancer burden in this region is the fifth-highest in the nation, with 214.5 per 100,000 Louisianans dying of cancer annually. For this reason, the region has been dubbed Cancer Alley, a name which only partially alludes to the devastating effects of chemical exposure on public health and safety. Elevated exposure to petrochemicals and hazardous wastes compounded with pre-existing conditions are directly linked to a greater risk of COVID-related death and disability.

EDGI’s Environmental Enforcement Watch (EEW) new report card on EPA enforcement in his district between 2001 and 2019 adds to the public understanding and discussion around Richmond’s nomination. Data from this report card are based on EPA’s publicly available Enforcement and Compliance History Online (ECHO) database. This report gives a snapshot of permit violations, inspections, and enforcements under the Clean Air, Clean Water, and Resource Conservation and Recovery Acts and extends EEW’s congressional report cards project. These report cards aim to make violation, inspection, and enforcement data directly accessible to members of Congress.

Under Richmond’s watch, industries have routinely violated these crucial environmental laws and the EPA has failed to respond with enforcement actions. Overall, violations have increased, inspections have been infrequent and enforcement actions few and far between in Louisiana’s 2nd district. Richmond has profited while these facilities avoided culpability and endangered public health. Now, he is responsible for facilitating public engagement with the White House via coalition building, public education, advocacy, and policy leadership.

Under the Obama Administration, the Office of Public Engagement forbade lobbyists from serving in the administration and enacted a gift ban, limiting the influence industries can have on the OPE. The Biden administration has not yet indicated what its own directives for the OPE will be. Richmond’s history raises questions about whether he will act as a liaison for special interest groups in the oil and gas industry, rather than the millions of people directly impacted by their negligence. Richmond’s nomination also underlines the importance of continued scrutiny of the Biden-Harris administration by public interest organizations. If Richmond has failed to protect the people of his own house, what will he do in the White House?