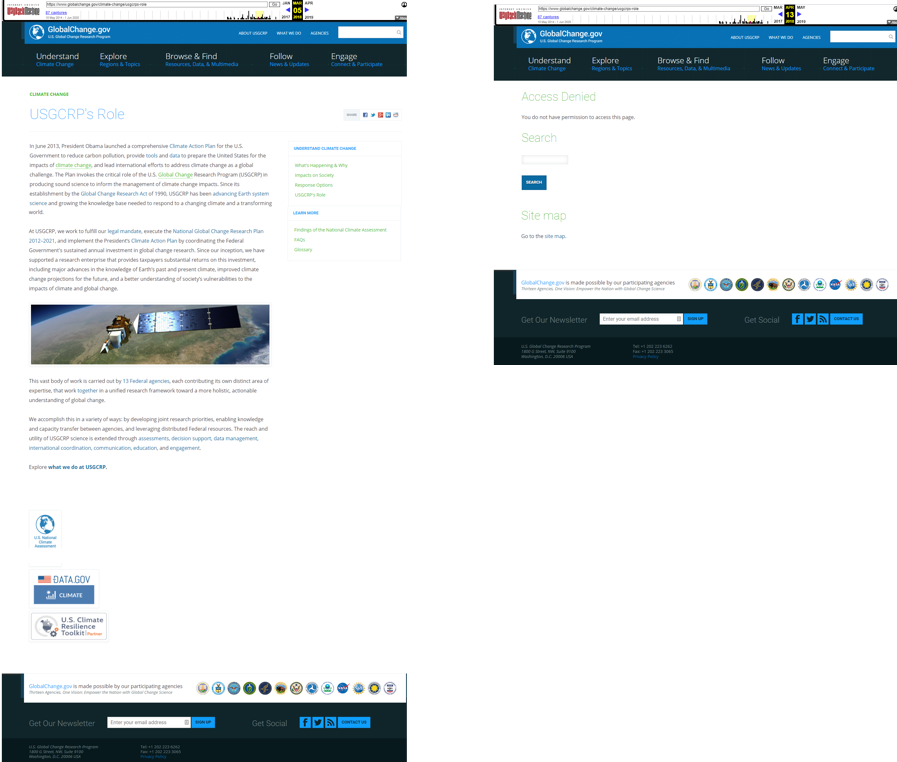 Welcome! This post is part of the EDGI Website Monitoring Team’s “Change of the Week” blog series. The purpose of this series is to highlight interesting changes we have observed in the language used on, or access to, federal websites. We want to share these changes to encourage public engagement with and discussion of their significance, as well as understanding of the ephemeral nature of website information. This week’s change occurred in March 2018 and features the restriction of information about the role of the U.S. Global Change Research Program. We first reported on this change in our whitepaper The New Digital Landscape: How the Trump Administration Has Undermined Federal Web Infrastructures for Climate Information.

Why we think it is interesting: The U.S. Global Change Research Program is mandated by Congress to coordinate and facilitate collaboration among federal agencies to research global change, and to publish a National Climate Assessment every four years. The “USGCRP’s Role” page explained more about the specific charge of the program with respect to addressing climate change. The page had referenced President Obama’s 2013 Climate Action Plan, which President Trump rescinded in early 2017, but rather than editing the page, the Trump administration removed the entire page from public view.

The Biden administration is prioritizing repair of this damage, demonstrated by appointing climate-focused leaders across the Cabinet, and particularly by appointing two senior climate officials: Gina McCarthy to orchestrate the U.S. domestic climate agenda and John Kerry to reestablish participation and leadership in international climate policies. McCarthy and Kerry both have extensive expertise in developing policies to address climate change. EDGI’s work has shown widespread and severe attacks on public climate change information, undermining public knowledge and civic engagement regarding climate change. We look forward to the new climate team’s concerted attention to the climate crisis, along with the opportunity to share with them the reductions in public information from federal environmental agencies that EDGI has documented over the past four years.