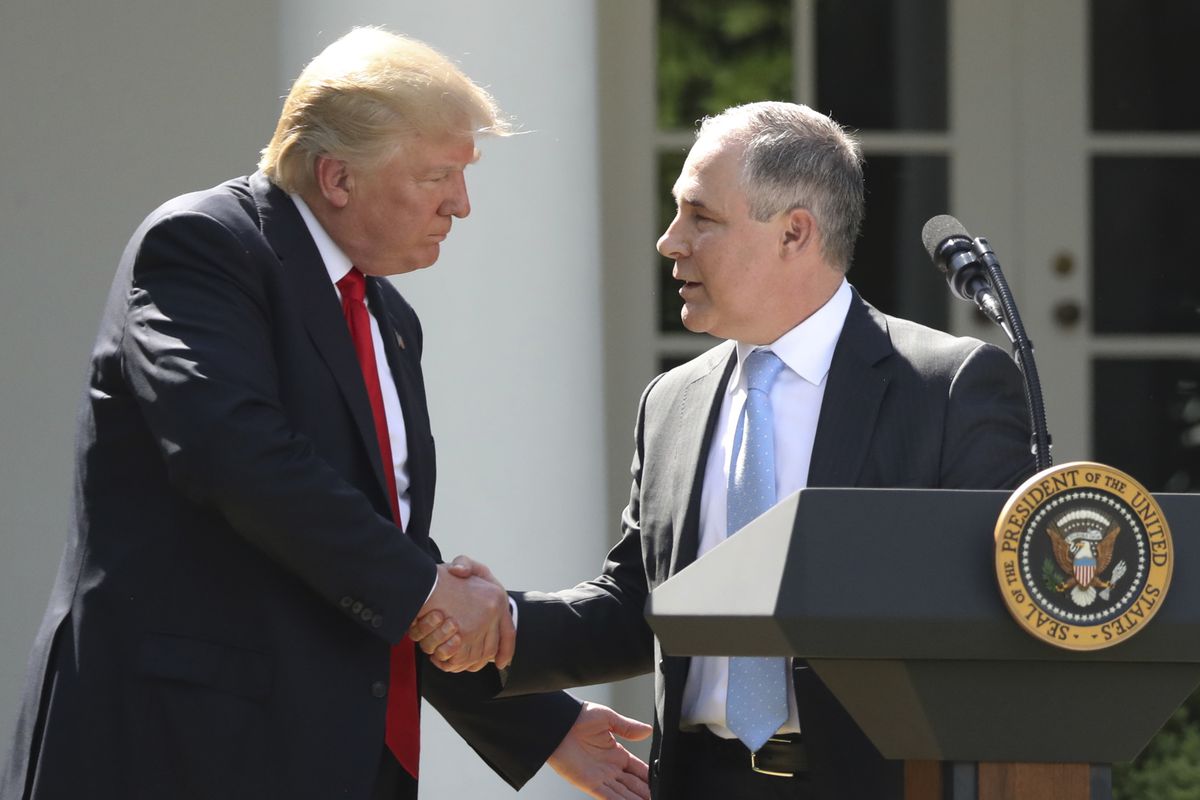 Pruitt has been packing the EPA with climate skeptics and following through on Trump’s campaign promises to give “relief” to fossil fuel interests. (Andrew Harnik/AP)

It’s been quite a week for EPA Administrator Scott Pruitt.

On Thursday, we learned — thanks to reports in Climatewire and the New York Times — that he met with coal executives and lobbyists at a meeting of the American Coalition for Clean Coal Electricity and promised them “red team, blue team” exercises to evaluate climate science. (The broad consensus among scientists and other climate experts is that such debates are wholly unnecessary, given that we already have excellent systems in place to vet climate science, and that the fundamentals of climate science are incontrovertible at this point.) It was a clear signal that Pruitt intends to take government-sanctioned climate skepticism to the next level.

Earlier in the week, Pruitt went before the Senate Appropriations Committee to explain how he was returning the agency “back to basics.” Under his new and improved management, he claimed it was on course to better fulfill its “core” missions even while seeking 31 percent fewer funds and a 25 percent smaller staff.

An announcement that same day suggested how he was seeking to do so: by paring back even the most core of its missions, clean water. The proposed repeal of the Waters of the US rule, the Obama administration’s decision about which waterways should be subject to pollution control, will withdraw EPA oversight of waters from which over 100 million now Americans drink.

Democrats and even a few Republicans didn’t buy Pruitt’s budget pitch. “We have rejected changes like these in the past, and I will certainly push my colleagues to do so again this year,” said Sen. Lisa Murkowski, a Republican from Alaska.

But Pruitt and his staff have already ripped into the agency quickly and deeply, as my colleagues at the Environmental Data and Governance Initiative and I detail in a recent report.

We are a group of academics, and as part of our effort to track the new administration’s impacts on environmental agencies and science, we conducted more than 50 in-depth interviews with EPA employees. We found that morale there has plummeted, anxiety is rife, science is being choked off, and much work has been paralyzed. Our report, along with the news reports of Pruitt’s anti-science antics this week, confirms that Trump and Pruitt pose the biggest threat the EPA has faced in its 47 years of existence. 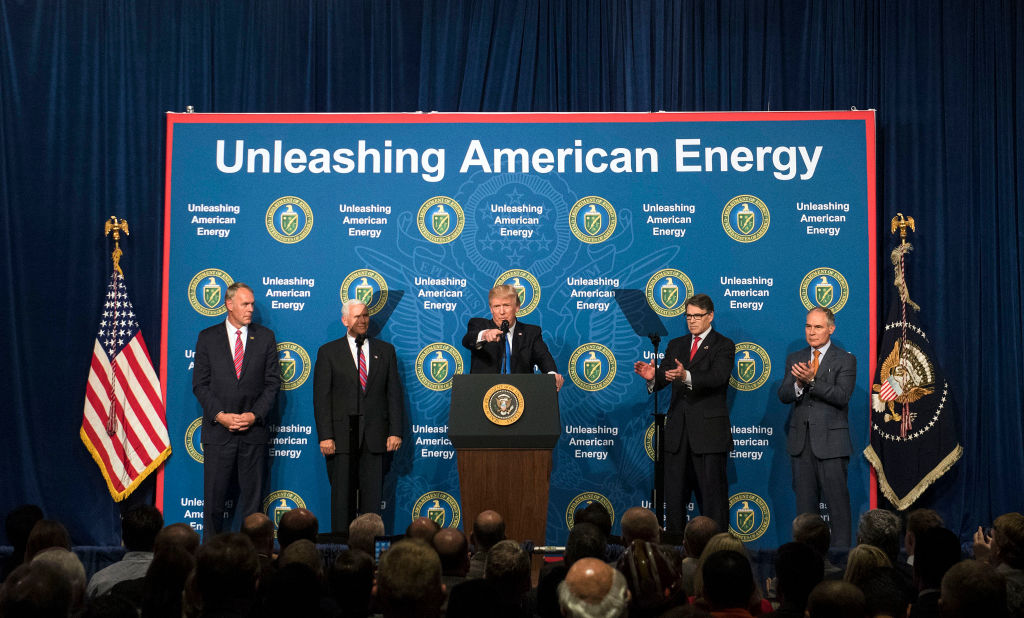 Among the many parts of the “deep state” now under attack by the Trump Administration, the EPA has been singled out, in startling fulfillment of the president’s campaign promise to break the agency into “little tidbits.” Pruitt, the assigned hitman, earned his appointment by snuggling up to oil and gas industries as Oklahoma’s attorney general, then leading 14 lawsuits against the EPA.

With single-minded, often secretive methods, he has led a charge to breakdown the agency’s mores and mission. In its overt hostility and in the pressures it has brought to bear, this assault has surpassed that during the early months of Ronald Reagan’s first term, long recognized as the darkest years in agency history.

Pruitt’s inaugural speech pledged his devotion only to the law and histories written by right-wing ideologues, without even the lip service to protecting health or the environment mustered by Reagan’s first EPA administrator, Anne Gorsuch. Ronald Reagan never deigned to visit EPA headquarters, but Trump and Mike Pence already have, the only president and vice-president ever to do so to provoke rather than praise.

Upon their visit, employees were literally shut out of their own auditorium, as energy industry representatives and their politician friends filled the seats. Agency staff told us they could only watch over closed-circuit TV as Pence joined Trump to declare the agency’s “war on coal” and its “attack on American industry” to be over. As “in-your-face insulting [a] thing as I’ve experienced in my time here,” reflected one who’d been at the agency since the 1970s.

The war on the EPA has been swift and brutal. The budget put forth by the White House for fiscal year 2018, which Pruitt defended before Congress, signaled an unmistakably hostile intent to those inside the agency.

EPA has been slated for single-year reductions broader and deeper than any put forth by the Reagan White House, and the largest for any major federal agency. They target climate change programs and scientific research but also much more: 47 programs would be eliminated entirely and 50 to 90 percent slices taken from many others, across nearly every facet of EPA’s mission.

As Murkowski and several other congressmen signaled this week, the deep budget cuts will be turned back by Congress. But Trump’s executive orders, more numerous and altogether more ambitious than Reagan’s first, are already cutting broad swathes across the agency, without approval or oversight from legislators.

Some target whipping boys of conservatives from the Obama era, like the “Waters of the US” rule and the Clean Power Plan, but the more sweeping ones — to get rid of two old rules for every new one, to review existing rules for “burdensomeness,” to reorganize with a view to downsizing — may well inflict the deepest wounds. Together they are driving a host of internal deliberations aimed almost entirely at curtailing what the agency does and can do.

“We’re not going to be doing much science anymore”

Among the agency’s many familiar ways of working, Pruitt has placed its original and long-standing reliance on science most squarely on his chopping block. That his chief of staff may have pressured a member of the EPA’s Board of Scientific Counselors to alter Congressional testimony, as reported Tuesday in the New York Times, is only the latest step in a campaign to decimate that board, and more generally, sever the agency’s ties to the academic scientific community.

Pruitt and his staff have also pointedly disregarded the agency’s own scientific staff. Their reversal of the previous administration’s ban on the pesticide chlorpyrifos, done reportedly without consulting experts in the pesticide office, but instead, we’ve just learned, after a private meeting with the CEO of the chemical’s manufacturer, set an early precedent. While the agency’s use and pursuit of science also faced similar challenges during the early Reagan years, never have these been so overt or systematic. “We’re not going to be doing much science anymore,” one of our interviewees opined.

Pruitt has also proven to be not just a more experienced but also a savvier operator than Reagan’s Gorsuch, at least so far. He has furnished a veneer of coherence to it all by touting agency “originalism,” a “return” of the EPA to its “basic” statutory obligations. The agency’s internal publicity, featuring his handshake with a coal miner, not so subtly warns agency staff to return “back to basics,” though exactly how far “back” and to which “basics” is left rather ominously unclear.

Pruitt’s testimony Tuesday and two weeks prior, before a House committee, did highlight a couple of EPA programs he now pledges to improve: the Superfund (despite proposing a 25 percent cut to its budget), and toxic substances control, by implementing a 2016 reform law. Given what else employees have seen from him, such vows look like obligatory window-dressing, obscuring a broader intent of reducing the agency to a shadow of its former self.

On all these fronts, the current assault on the agency is well on track to wreak greater havoc than Reagan did. Back then, Democrats controlling House and the many Republicans still supporting the agency were able to limit EPA’s losses over Gorsuch’s two years to 20 percent of its budget and 26 percent of its staff.

Today, with Republicans in control of Congress through 2018 and so many of them utterly hostile to the agency and its work, Trump and Pruitt have every opportunity to deal the agency a more crippling blow. Many longtime employees told us think that’s precisely what will happen.

Pruitt’s secretive and closed-circle decision-making has exacerbated agency employees’ anxieties and disgruntlement. New internal hurdles have arisen for the work at hand, as formerly routine matters from informational webinars to enforcement actions now need approval from the administrator’s office.

While not unusual for presidential transitions, the current bottlenecks have been exacerbated by the historic slowness with which mid-level political appointees are being nominated and approved — in part, employees say, because who would give up a good business job to “dismantle an agency or try to run a program with no money and no staff.” Even those staffers reluctant to criticize admit to disarray; others frankly describe their office as in a state of “near paralysis.”

Little wonder, then, that so many long-serving employees in Pruitt’s EPA report morale there to be lower than they’ve ever seen. The “consensus” among many is that “at bottom,” the new leadership is “basically trying to destroy the place.” This inhospitable a workplace is no accident; it furthers a goal Pruitt reaffirmed at his hearing, of shrinking the agency’s workforce.

Some have already resigned, in more or less vocal protest, and a new round of buy-out offers has many others contemplating leaving. Other staff are gritting their teeth and working with the newcomers, or else keeping their heads down, to sustain as much as they can of their own sense of the agency’s mission.

As in the early Reagan years, the leaks to the press have begun, and employee unions are showing a new feistiness. Of course, EPA employees themselves can only do so much to uphold the agency and its mission in the face of this onslaught. They need support and supporters, more so now than ever before.

One key determinant of the agency’s future, especially with prospects so dim for the Congressional hearings that effectively confronted Gorsuch’s EPA, is whether the media, and environmental and other citizen groups can stand in. Can they shine and sustain enough light on destructive decisions and corrupt dealings inside the agency?

Can they illuminate the health, community, and ecological consequences of slashing its staff and programs, enough to make a political stir? And if they can, will enough Republicans find the courage, and Democrats the willingness to join with them, to revive the EPA’s long legacy of bipartisan support?

Today’s leadership has brought the EPA to a critical juncture. We may be on the threshold of a harsh new era of hands-off environmental governance, that will worsen Americans’ mounting environmental vulnerabilities. More hopefully, with enough of a civic and political groundswell, we may remember the current assault on the EPA like we do Reagan’s, as trauma that proved temporary and passing.

Christopher Sellers is professor of history at Stony Brook University, a fellow at the Wilson Center, and on the steering committee of the Environmental Data and Governance Initiative (EDGI). He is the author of Crabgrass Crucible: Suburban Nature and the Rise of Environmentalism in 20th-Century America, and forthcoming books on the history of environmental politics in Atlanta, Texas, and Mexico.