by Leif Fredrickson, EDGI Member, Op-Ed reblogged from The Guardian. 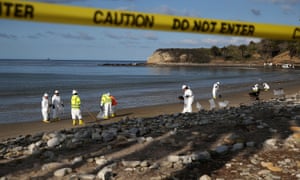 ‘The EPA began in 1970 as an agency charged with curbing pollution.’ Photograph: Justin Sullivan/Getty Images

The Environmental Protection Agency’s new administrator, Scott Pruitt, has called for a “back-to-basics” or “originalist” approach to the agency. It is unclear what he means, but in a 22 May memo he said he would prioritize the EPA’s program that handles heavily contaminated waste areas, known as “Superfund sites”.

In the memo, Pruitt heralds that under his administration, “Superfund and the EPA’s land and water cleanup efforts will be restored to their rightful place at the center of the agency’s core mission”.

For Pruitt, the primary role of the EPA is janitorial: using taxpayer money to clean up after polluting industries. But that is neither how the EPA was originally envisaged, nor how the Superfund program was conceived.

The EPA began in 1970 as an agency charged with curbing pollution. Throughout the 1970s, Congress gave the EPA power to set limits on air pollution, regulate automobile emissions, define appropriate water treatment technology, set drinking water standards and regulate pesticides. Outside of minor provisions, this legislation was about the EPA preventing pollution, not cleaning it up.

In 1976, rising concern about uncontrolled dumping and burning of hazardous materials prompted passage of the Resource Conservation and Recovery Act, which allowed the EPA to regulate hazardous waste from cradle to grave.

In the 1940s and early 1950s, for example, the Hooker Chemical Company filled an old canal – Love canal, as it was known – with some 21,800 tons of chemicals, some of which Hooker knew to be hazardous.

In 1953, the company covered the canal with dirt and sold it to a local school board for a dollar. The city built a school and playground atop the dump, and residents built houses along its edge.

As knowledge of the hazardous legacy at Love Canal and similar places emerged in the 1970s, it generated fear, outrage and grassroots, anti-toxic movements. These movements in turn bolstered support for an EPA program to address existing hazardous waste sites.

In 1980 – 10 years after the birth of the EPA – Congress passed the Superfund Act. The law imposed strict liability for the cost of cleanup on entities responsible for hazardous waste sites. It also established a small tax on chemical and petroleum industries that were associated with hazardous waste.

Money from the tax fed a large trust fund, a “Superfund”, which the agency could draw on to clean up “orphan” sites, where responsibility could not be determined. In both cases, the idea was that the “polluter pays”, either as a directly responsible party or as part of an industry generally responsible for hazardous waste.

The Superfund tax survived for 15 years, building up a large trust fund used for cleanup. Two Republican presidents, Ronald Reagan and George HW Bush, signed off on reauthorizing the tax in the 1980s and 1990s. As the Superfund program developed, the EPA discovered thousands of new sites, making funding for the program all the more important.

But rightwing Republicans who took control of Congress in 1994 rebuffed Bill Clinton’s urging to renew the tax. It expired in 1995.

The trust fund peaked in 1996 at about $5.5bn (in 2016 dollars). But without a source of replenishment, the well ran dry by 2003, leaving taxpayers with the bill for cleanup. Since then, Congress has trickled general revenue money into the program with smaller and smaller appropriations ever year. Without adequate funding, the EPA’s progress on cleanup has slowed dramatically.

In 2010, the EPA asked Congress to renew the tax, arguing that doing so would “ensure that parties who benefit from the manufacture or sale of substances that commonly cause environmental problems at hazardous waste sites, and not taxpayers, help bear the cost of cleanup”. Barack Obama and legislators have also pushed to renew the tax, but without avail.

It is time to bring the Superfund tax back. No doubt, the program can be made better. Superfund taxes on industry, for example, could be better calibrated with the amount and degree of hazardous waste produced. Supplements from general tax revenues are reasonable.

But the bedrock idea that industries connected to pollution should fund hazardous waste cleanup should stay in place. It is a fairer, if imperfect, system than putting the burden on taxpayers. And it is the only way to assure adequate funding over time and thus to make Superfund cleanup a priority in practice.

In addition, while it is justifiable to make Superfund cleanup one of the top EPA priorities, it should not supplant the core mission of the EPA: to curb pollution before it happens.

That requires enforced regulation, which also must be prioritized. We need and deserve more from the EPA than a janitor sweeping up after polluters have left the scene.